An object model is a collection of objects or classes through which a program can look at and manipulate it to some extent. The objects can be accessed via object references. To invoke a method in an object, the object reference and method name are given, together with any arguments.

The Component Object Model in UFT provides a standard way for applications (.exe files) or libraries(.dll files) to make their functionality available to any COM-compliant application or script. For example, consider Microsoft Word Application. You can open a Word document and write any text, create tables and chars, and do many other things. Now, what if you want to do all these tasks through code ( i.e. without manually opening Word document). This is the situation where you would need a Component Object Model in UFT.

To create a Component Object CreateObject method is used.

CreateObject Function: Creates and returns a reference to an ActiveX object.

The class argument uses the syntax appname.objecttype and has these parts:

In this example appname is “Word” and objecttype is “Document”

For example, when you write a script that uses WORD, WORD is the COM server and your script is the COM CLIENT

COM servers can be implemented in one of two ways:

For example, when you start a script for creating a Word Object, an instance of Wscipt.exe begins to run. If you next instantiate a Microsoft Word object, you are then working with two processes, Wscipt.exe and Winword.exe

In-process servers: Libraries(.dll files) are known as in-process-servers because they run in the same process as the application or script that called them.

A Web Page consists of different objects(like textbox, images, web tables, forms, buttons, etc) is organized in a tree structure. The Document Object Model is an API that allows programs to access and update the content, structure, and style of documents. 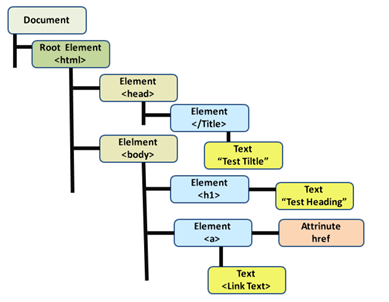 The following are the most common ways to access the Document Object Model (DOM) in UFT.
Example 1: Consider the following HTML code

To set a value in the userName text box using .Object.all.tags, we can use the following code.
Visual Basic

Example 2: To retrieve all hyperlinks in a page and click on a particular link using .Object.links

Example 3: Find all objects with input tags and set a text if the name property is userName using .Object.getElementsByTagName(“tagname”)

A Test Object Model (TOM) is a collection of object types or classes used by UFT to represent the objects in a test application. For example, a textbox represents an object of text class.
Each test object class has several properties that can uniquely identify the objects of the particular class and a set of methods to perform specific actions.
The following are two types of objects in TOM
A test object is an object that UFT stores in the Object repository to represent the actual object in a test application. Using SetTOProperty we can update the property of an object that is stored in the object repository.
A run-time object is an actual object in the test application on which methods are performed during the run session.GetROProperty is used to retrieve the actual run time property of an object.

Setting a value in a text box using a combination of DOM and BOM.

Examples of Reporter.ReportEvent in UFT