Unified Functional Testing (UFT) is an advanced and powerful tool to do functional as well as regression test automation for a software application. UFT provides out of box support for web services API testing and no longer requires web services add-in. This feature is available in UFT 11.50 onwards. You can test web services in UFT by using UFT API testing features.

The following versions of Windows OS are supported by UFT 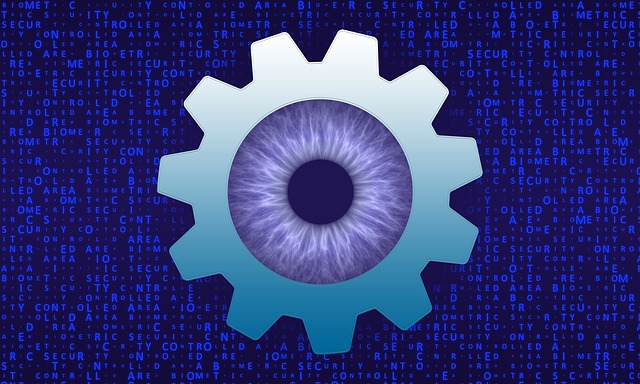 Every software application consists of different objects like buttons, Text Boxes, Radio buttons, and drop-downs, etc. For UFT every object is a test object and each object has certain properties (e.g. ID, Name, Index, etc.).

During the recording of a script, UFT learns the properties of the objects on which an operation is performed and stores the test objects in a file called Object Repository.

Below is a sample screenshot of the HP Mercury demo tour application.

The following is the HTML Source Code for the SIGN-ON hyperlink.

The following are a few key properties of the SIGN-ON hyperlink.

If you open the object repository, you will see the above two properties in the Test Object Details section. 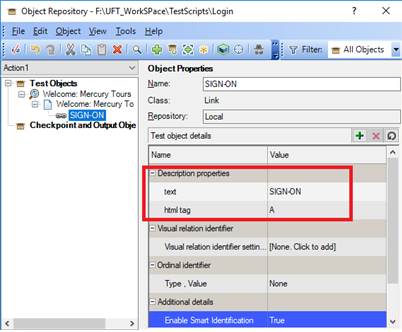 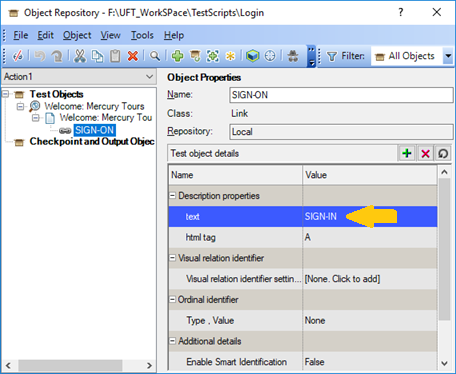 At runtime, there happens a mismatch in the text property of the SIGN-ON test object and the script shows the error “Cannot identify the object <<Test Object Name>>“. In this case, the test object is the SIGN-ON hyperlink.

If you restore the changes of the test object the script will click on the SIGN-ON hyperlink.

The above screenshot shows the mandatory as well as assistive properties of a link object. Both the properties are configurable. You can adjust it by click on the “Add/Remove” button. 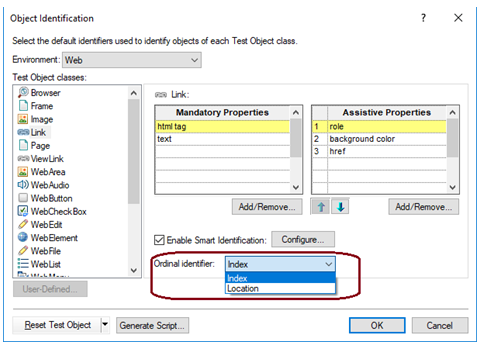 There are three types of ordinal identifier.
Index: Indicates the order in which the object appears in the application code relative to other
objects. The indexing counter starts from 0. Therefore, if you use Index:=1 to describe a WebEdit test object, UFT will look for the second WebEdit object on the page rather than the first object.
Example: The following statement refers to the third text box on the page
WebEdit(“Name:=UserId”, “Index:=2”)
Location: Indicates the order in which the object appears within the parent window, frame, or dialog box relative to other objects with an otherwise identical description.
Example: WebEdit(“Name:=UserId”, “Location:=2”)

Now it seems that both Index and location are the same. So, what the difference between them.

The Index is the order, a developer has coded the controls inside the application. However, Location is the order in which it appears on the screen. 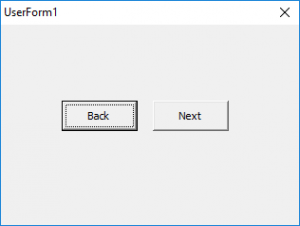 Creation time is assigned to the browsers in the sequence they are opened. If you have opened three different browsers, the creation time of the first browser would be 0, and so on.

When UFT uses the learned description to identify an object, it searches for an object that matches all of the property values in the description.

These are the most fundamental properties of a particular test object class; those whose values cannot be changed without changing the essence of the original object. For example, if a Web link’s tag was changed from “Html tag:=A” to any other value, you could no longer call it the same object.

Optional Filter Properties. Other properties that can help identify objects of a particular class. These properties are unlikely to change on a regular basis but can be ignored if they are no longer applicable.

What are new Features in the UFT One Datatable?

Most Useful VBScript Functions That You Must Know

How to Record a Script in Chrome Browser in UFT